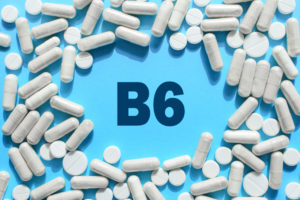 Researchers have found that vitamin B6 can help the survival of acute myeloid leukemia cells. While there is vitamin B6 in many foods including meat, dairy, fruits, and vegetables there is no need to stop consuming these foods as Dr. Lowe says there isn’t any indication that consuming it causes or facilitates cancer. Read the article below for more information regarding this finding.

Tumors require many building blocks to support the cell division needed to grow and spread. For that reason, an important approach in the development of new drugs is to look for ways to target the metabolism of cancer cells. A class of metabolism-influencing drugs called IDH inhibitors is already being used to treat some cases of acute myeloid leukemia (AML).

Researchers from the Sloan Kettering Institute and Cold Spring Harbor Laboratory (CSHL) recently discovered a surprising contributor to AML cell metabolism: an active form of vitamin B6, also known as pyridoxal 5’-phosphate. The findings were published January 13 in Cancer Cell.

“This research suggested for the first time that the vitamin B6 pathway might be important for sustaining cancer,” says co-corresponding author Scott Lowe, Chair of the Cancer Biology and Genetics Program at SKI. “We already knew that vitamin B6 served as a regulator for a whole series of enzymes that are needed to make the building blocks required for cell growth and proliferation.”

Homing in on the Vitamin B6 Pathway
The study involved a collaboration between Chi-Chao Chen, then a PhD student in the Lowe laboratory, and Lingbo Zhang, a CSHL Fellow, who searched for molecular vulnerabilities that could be targeted in AML cells while sparing normal cells. They used the gene-editing tool CRISPR to upset different genes in these cells and study the effects. One gene that rose to the top of the list of important players was PDXK.

The PDXK gene directs the production of proteins that produce PLP, the active form of vitamin B6. Previous research had established that PLP can be blocked with isoniazid, an antibiotic used to treat tuberculosis (TB) infections. In TB, isoniazid works by attacking enzymes produced by the Mycobacterium tuberculosis bacterium. In cell cultures and mouse models of AML, it curbed the function of PLP, which in turn inhibited the growth of cancer cells.

“When we further studied the vitamin B6 pathway, we uncovered the role of another protein having similar AML selectivity, called BCL2,” Dr. Chen said. “It turns out there is already a drug that blocks BCL2, called venetoclax (Venclexta®), which is approved to treat AML and other blood cancers. However, that drug works not by affecting metabolism, but by promoting cell death.”

Effects on Fast-Growing Cells
Dr. Lowe and his colleagues still aren’t sure why AML cells are so sensitive to drugs that block PLP. “It’s a bit of a puzzle, and something we still need to determine,” he says. “It could be that because these cells grow so fast, they’re just more vulnerable to the effects on this pathway than other types of cells.”

Though vitamin B6 is found in many foods including meat, fish, dairy products, and some fruits and vegetables, Dr. Lowe doesn’t think that people with leukemia need to be concerned about consuming these foods. He notes, “Although our study provides evidence that AML needs this vitamin to proliferate, there isn’t any indication that consuming it causes or facilitates cancer. Vitamin B6 is important for many functions in the body and eliminating it completely would cause serious harm.”

Looking for Combination Approaches
Research on vitamin B6 and leukemia is still in early stages, but it’s something Dr. Lowe and his team intend to pursue. “We don’t have any plans to start giving isoniazid to people with leukemia because we don’t think it’s sufficiently potent for this treatment. But isoniazid demonstrates that it’s possible to develop drugs that target this pathway,” Dr. Lowe says.

His group plans to work with the Tri-Institutional Therapeutics Discovery Institute of MSK, the Rockefeller University, and Weill Cornell Medicine to develop this approach. He expects that one likely tactic will involve combining a PLP inhibitor with venetoclax.

“Although vitamin B6 hasn’t previously been implicated in cancer, there have been studies linking other vitamins, including vitamin C and vitamin D,” Dr. Lowe concludes. “These latest findings further emphasize the importance of studying vitamin signaling pathways in cancer.”