September, which is recognized as childhood cancer awareness month, brings the utmost support to children and their experiences with cancer. In the article below we give four ways to support families facing childhood cancer and how a small act of kindness can go a long way. 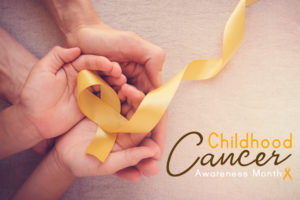 The National Cancer Institute estimates that 15,270 children and adolescents in the United States will receive a cancer diagnosis in 2017. During September, Stanford Children’s Health observes Childhood Cancer Awareness Month with wisdom from Gabriella Medrano-Contreras, the mother of Giselle, a patient and cancer survivor who received treatment for leukemia at Lucile Packard Children’s Hospital Stanford.

“We celebrated Giselle’s third birthday in the hospital,” says Gabriella, referring to the early days of her daughter’s cancer treatment. Giselle was diagnosed with acute lymphocytic leukemia (ALL) in 2014, and her first round of chemo landed her in the Pediatric Intensive Care Unit (PICU) at Packard Children’s, where she would go on to spend an additional eight weeks.

“It was a long, scary beginning,” says Gabriella. Now age 6, Giselle is about to celebrate a milestone anniversary. It’s been one year since her final chemo treatment at the Bass Center for Childhood Cancer and Blood Diseases, which was nationally ranked by U.S. News and World Report and is part of the NCI-designated Stanford Cancer Institute.

As a mother who helped her daughter face and overcome leukemia, Gabriella draws upon her personal experiences to offer guidance for parents, family and friends who want to lend support to families in the throes of childhood cancer.

“The people who just showed up at my door were the most helpful,” Gabriella says of the many friends who offered their assistance. “Sometimes I would get a text at six in the morning saying ‘I just cooked dinner for you. I’m dropping it off.’ Not asking me if I wanted it.”

Rather than saying, “Give us a call if you need anything,” Gabriella says taking the initiative to drop by with a carton of milk or provisions for a family dinner is the best way to show support for families facing childhood cancer.

When Giselle first began receiving treatment for leukemia, Gabriella worked to shield her daughter from outside influences that could potentially compromise Giselle’s fragile immune system. Gabriella took steps to prevent infections from entering their family home by educating family and friends about hand-washing protocols and cautioning them that, “If you have a cough, please don’t come over.”

At the time, Giselle was still too young to be in school. However, Gabriella also took precautions to ensure that her other children — Giselle’s siblings — were not exposed to anything in the classroom.

“I remember talking to my oldest daughter’s teachers, saying ‘If there’s a virus going around, I need to know,’” remembers Gabriella. “One of the ways we did that was we wrote a letter to the school. The school allowed us to reach out to parents in my daughter’s classroom. We educated them by saying what was going on in our family.”

Side effects associated with Giselle’s chemotherapy treatment contributed to immune system deficiencies, kidney stones and, at one point, the loss of her ability to walk. Despite conventional ideologies that support the benefits of a high-fat diet for leukemia patients, Gabriella was firm in her conviction to establish healthy eating practices with Giselle.

“Yes, of course, kids will be appalled at first at what you give them,” she explains. “Three and half years ago, before we were affected by cancer, my kids hated everything that was green. As you slowly introduce things, their palette changes. It is a battle at first.”

Gabriella’s passion to help her daughter eat healthfully was in part motivated by her awareness of the propensity for ALL survivors to develop chronic health conditions, including obesity.

Be a ‘Wondergirl’ or ‘Wonderguy’

Despite the obstacles and setbacks associated with her cancer treatment, Giselle never lost her cheerful attitude.

“My baby was so sick from chemo. But she smiled and stayed positive through it all, so we started calling our brave and strong superhero ‘Wondergirl,’” Gabriella shared with Packard Children’s News, the magazine of the Lucile Packard Foundation for Children’s Health.

A significant mile marker in this Wondergirl’s cancer journey took place on November 26, 2016, when nurses at the Bass Center surprised Giselle with a cake because she was cancer free.

According to Gabriella, her Wondergirl is in need of heroes. Giselle will not be content until there is a cure for all her cancer friends. Advances in immunotherapy research inspire hope among cancer patients and their families that the treatments of the future will be less invasive and not fraught with the grueling side effects of today’s treatments. Donations to advance research toward the cures of tomorrow help support healthier futures for young cancer patients.