Anthony D, a Brain Cancer survivor gives his story of how he and his family supported him throughout his treatment at the Cancer Treatment Center of America. C3 for Change wants you to know you are not alone in your cancer journey. We are here to help answer questions, while raising money to find a cure. Your experience and journey matter to us. Read the article below to find out more about Anthony’s journey. 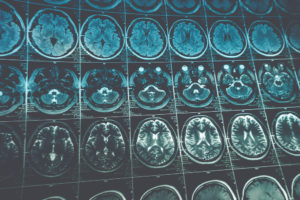 My story begins with numbness. One day in 2012, three of the fingers in my left hand suddenly lost their feeling. My family—me, my wife, Amber, and our four sons—were living in Arizona at the time, and I made an appointment to see a doctor right away. The feeling was restored by the time my physician could see me, but Amber convinced me to proceed with the appointment. I had an X-ray to see if the spine showed any signs of damage, perhaps from truck driving. When some suspicious spots turned up on the film, my doctor recommended an MRI of my brain.

The MRI set off alarm bells. The image showed lesions in my brain and a large mass at the front. My doctor urged me to see a neurologist immediately. After several tests, the neurologist thought I had multiple sclerosis, or MS, which as I understand, may look similar to cancer.

Wanting to know all of our options, my wife and I decided to seek a second opinion. Again, after several tests, the second neurologist also felt I had MS. Amber and I decided we would follow the doctor’s suggestion that I begin treatment.

Life calmed down for a time. I started taking medication for MS and saw my neurologist regularly. But three years later, things took a turn. We had just moved to Texas because my mother was sick and we wanted to be near her. My prescription needed to be renewed, and the doctor I saw wanted to do a new MRI to make sure that my condition was not progressing. At that time, my scans didn’t show that I had MS, but a possibility of cancer. She wanted to me to see a neurosurgeon in Texas right away.

During my first visit with the neurosurgeon, Amber and I felt concerned. The doctor confirmed that I had brain cancer and told me that it could be removed with a surgical procedure. I was panicking. I was going to have brain surgery. The thought of this was very scary. I was scared; Amber was scared.

Soon after that, we spoke with some friends at our church about what I was going through. Afterward, a woman we didn’t know approached us, wanting to tell us her story. She told us how her husband had treated at Cancer Treatment Centers of America® (CTCA). After hearing their experience, Amber and I thought it seemed worth a try.

After contacting CTCA® and being recommended that we travel to the Chicago hospital, Amber and I were hesitant because we did not want to be away from our children or my mother, who was also battling cancer. As time went on and we continued to review my options, we decided to move forward with CTCA after all, because we felt like we would receive the best care there.

Even before my first appointment, my intake physician and neurologist reviewed my scans and called me to request I come in for a biopsy to see if I had MS or cancer. At that point, a biopsy had not been performed yet. Still, Amber and I were nervous about being away from our children, but our entire family ended up traveling to Chicago together. After getting the biopsy, my neurologist confirmed I had grade II oligodendroglioma astrocytoma, a form of brain cancer. To our further shock, it turned out that I actually had both cancer and MS. For treatment, he recommended surgery first, followed by chemotherapy and radiation.

I had the surgery in November 2015, and the next day, I felt that my fingers and toes worked just fine. I walked out of the ICU. We spent three days at a hotel, and everything went smoothly. My neurosurgeon was confident that he’d removed the cancer entirely. And in doing so, I felt he’d left behind barely any sign of an operation. The incision was as minimal as possible. My head was shaved a tiny bit, but it was barely noticeable if I combed my hair the right way. And when interacting with me, my neurosurgeon was honest and straightforward, but also warm and caring.

We traveled home and spent Thanksgiving and Christmas in Texas. Then all six of us returned to CTCA for six weeks so I could continue my treatment.

During the next month and a half, I had 42 rounds of chemotherapy and 30 rounds of radiation. Amber home-schools our children, and she continued to do so during this time. But each time I had chemotherapy, one of our sons would come with me for some one-on-one time. Most days, we would have lunch, and then I would play some basketball at the gym. We went on field trip outings. We did whatever was available. I had some nausea, but the medication kept it mild. We followed the advice of my radiation oncologist, who recommended staying as active as I could, rest when I was tired, and follow my normal routines.

I worked with a nutritionist and a naturopathic oncology provider so I could follow a diet that would help me tolerate treatment. Amber enjoyed some trips to the salon and even took our sons for haircuts there. Everyone we met at CTCA was warm and friendly. As Amber likes to point out, we feel we did not see one grumpy person during the entire six weeks. Our children were informed about all I was going through, and my doctors did not hesitate to include them.

C3 for Change is not an affiliate with the Cancer Treatment Centers of America. C3 wants to give stories of support to all patients no matter their treatment plan or treatment center.