The ABCDE’s of Melanoma and What to Look For

While many people may have moles, brown spots and growths on their skin that may be harmless, sometimes they are not. Below are the ABCDE’s of Melanoma, giving you an idea of what to look for when you may see a spot on your skin. C3 wants you to remember, always get a spot on your skin checked out even though you may think it is harmless. 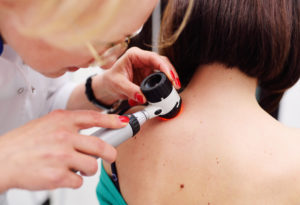 Melanoma is the most dangerous form of skin cancer, these cancerous growths develop when un-repaired DNA damage to skin cells (most often caused by ultraviolet radiation from sunshine or tanning beds) triggers mutations that lead the skin cells to multiply rapidly and form malignant tumors.

Moles, brown spots and growths on the skin are usually harmless — but not always. Anyone who has more than 100 moles is at greater risk for melanoma. The first signs can appear in one or more atypical moles. That’s why it’s so important to get to know your skin very well and to recognize any changes in the moles on your body. Look for the ABCDE signs of melanoma, and if you see one or more, make an appointment with a physician immediately.

B – Border
A benign mole has smooth, even borders, unlike melanomas. The borders of an early melanoma tend to be uneven. The edges may be scalloped or notched.

C – Color
Most benign moles are all one color — often a single shade of brown. Having a variety of colors is another warning signal. A number of different shades of brown, tan or black could appear. A melanoma may also become red, white or blue.

D – Diameter
Benign moles usually have a smaller diameter than malignant ones. Melanomas usually are larger in diameter than the eraser on your pencil tip (¼ inch or 6mm), but they may sometimes be smaller when first detected.

E – Evolving
Common, benign moles look the same over time. Be on the alert when a mole starts to evolve or change in any way. When a mole is evolving, see a doctor. Any change — in size, shape, color, elevation, or another trait, or any new symptom such as bleeding, itching or crusting — points to danger.

Complete and original article on skincancer.org