E-cigarettes: Teens ‘should not be using them at all’
Posted By Medical News Today – March 7, 2018 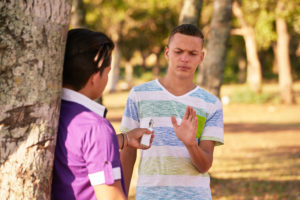 A new study confirms that e-cigarettes are harmful to teenagers and urges adolescents to stop putting their health at risk.

E-cigarettes sometimes contain nicotine, and sometimes they use nicotine-free solutions.

They offer users a similar sensation to smoking, but they do not produce smoke. Instead, they heat up the e-liquid they contain and create vapor, which is why using these devices is sometimes referred to as “vaping.”

However, while many adult users opt for e-cigarettes to ease themselves out of their smoking habit, some researchers have raised concerns that teenagers may be using them as a gateway into this very habit.

E-cigarette usage seems to be popular among many teenagers, despite the fact that the Food and Drug Administration (FDA) have banned the sale of such devices to people under 18.

“Teenagers need to be warned that the vapor produced by e-cigarettes is not harmless water vapor, but actually contains some of the same toxic chemicals found in smoke from traditional cigarettes. Teenagers should be inhaling air, not products with toxins in them.”
~ Dr. Mark L. Rubinstein

But recent research from the University of California, San Francisco now reveals that we may have more to worry about when it comes to teenage use of e-cigarettes — beyond addiction and the possibility of transitioning to traditional cigarettes.

Lead study author Dr. Mark L. Rubinstein and his team have found that teenagers who “vape” may be exposing themselves to dangerous chemicals that have been linked to cancer. Their findings were published in the journal Pediatrics.

Such toxic substances, the researchers add, are found both in e-cigarettes and in traditional ones, and teenagers need to be aware that even by opting for nicotine-free devices, they may still put themselves in harm’s way.

CLICK HERE TO CONTINUE READING
This story was originally posted on MedicalNewsToday.com.