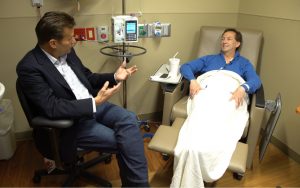 Old race car driver John Andretti went to a doctor’s appointment for a routine colonoscopy, and came out with a diagnosis he did not prepare for. Read the article below about John Andretti’s battle against Colon Cancer!

Nothing is probably “routine” for a race car driver – especially for an Andretti. They spend their lives preparing for any kind of scenario. But when 54-year old race car driver John Andretti went to a doctor’s appointment for a “routine” colonoscopy, doctors gave him a diagnosis he hadn’t prepared for.

During that January visit, doctors told John he had Stage 3 colon cancer. They quickly scheduled a surgery to remove 12-14 inches of his colon. As he healed from that surgery and went back for check-ups – he told doctors about a pain in his side. Doctors discovered the cancer had spread to his liver.

“Now I’m a Stage 4A. There is only a stage 4B from my understanding, so I’m not really excited about that. But the good news is that we are still on the side that has a good chance of being cured,” Andretti explained.

Andretti is always an optimist. He’s a giver, he’s a helper, he’s a rock-solid friend, a loving father and husband and certainly a fierce competitor. All of those qualities will help him in this race.

John raced in 12 Indianapolis 500s and spent 17 years in NASCAR. He had an amazing career. He has a wife of 30 years and 3 children. Now he’s reflecting back all that as he looks ahead to chemotherapy treatments and another surgery. Andretti and his wife, Nancy, now spend hours in the Levine Cancer Institute in Concord, North Carolina where John gets chemotherapy. He invited Dave Calabro to go with him to one of those treatments.

“Do you get mad at God?” Calabro asked, “Are you at a point where you’re frustrated, why me? You do so much good, I’m wondering how you’re processing this,” Calabro asked as he watched the chemo pump into Andretti’s body.

This article was originally posted on Wthr.com.