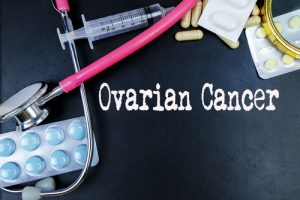 There is new proof your genes may hold the key to whether or not you have a higher risk of developing cancer. Moffitt Cancer Center researchers took part in a major international study published today in Nature Genetics that identified 12 new genetic variants associated with an increased risk of developing epithelial ovarian cancer, the most common and dangerous type of the disease. Epithelial cancer develops in the cells that cover the outer surface of the ovaries. This type of cancer accounts for almost 90 percent of all ovarian cancer cases.

An estimated one in 75 women will develop ovarian cancer during her lifetime. When a patient is diagnosed and treated in the early stages of the disease, the five-year survival rate is over 90 percent. But only about 20 percent of all cases are caught this soon. Due to non-specific symptoms and lack of early detection tests for ovarian cancer, most patients have progressed beyond stage I or II at time of diagnosis. If caught in stage III or higher, the survival rate can be as low as 28 percent.

This article was originally posted on Moffitt.org.