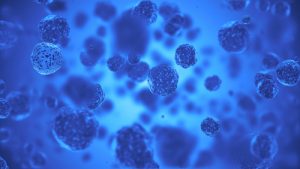 A drug called Val-boroPro has shown to shrinks tumors in mice. Research reveals it causes an inflammatory form of programmed cell death.

A drug called Val-boroPro triggers an immune response against cancer in mice, but until now, researchers didn’t know the mechanism. The laboratory of Daniel Bachovchin at MSK discovered that Val-boroPro blocks two proteins, DPP8 and DPP9, causing a form of inflammatory cell death called pyroptosis, which spurs an immune attack. This is the first time pyroptosis has been known to be caused by a drug, which can be used as a tool to study immune function.

Despite several immunotherapy drugs gaining FDA approval to treat multiple cancers, these therapies do not work in every patient. In light of this, researchers are continuously searching for new ways to activate the immune system and make such treatments more widely effective. One drug, called Val-boroPro, has intrigued scientists for nearly a decade because it has been shown to shrink tumors in mice and “immunize” them against future cancers. But there was one hitch: For years, nobody could quite figure out how it works.

A team led by Daniel Bachovchin, a chemical biologist in the Sloan Kettering Institute (SKI), has discovered that Val-boroPro activates the immune system to attack through a form of highly inflammatory programmed cell death called pyroptosis. This finding, reported in Nature Chemical Biology, could help researchers unravel how various immune system components interact, using Val-boroPro as a tool. Pyroptosis occurs in immune cells called monocytes and macrophages. It usually is induced when a pathogen (such as a bacterium or virus) infects these cells, in part to hide from immune detection. In response, the cells swell, burst, and die, releasing pro-inflammatory signaling molecules. This self-destruction also releases the pathogens back into the surrounding environment and attracts other immune cells to fight the infection.

Although pyroptosis had been studied extensively, researchers had never seen a small molecule drug induce this form of cell suicide. Uncovering this cause and effect opens the door to a range of new research and therapeutic applications. “Not only does this give us something that could be a therapeutic tool, it reveals an element of the biology that we didn’t know existed,” Dr. Bachovchin says.