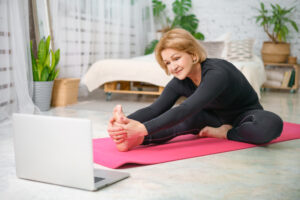 It may seem like exercising is intangible for cancer patients, but staying active is actually strongly encouraged. Doing non-straining exercises can be very beneficial to maintaining cancer patients’ overall health. Read the article below to learn about Kikkan Randall’s story with exercising through her cancer treatment.

Getting diagnosed with most kinds of cancer used to be shorthand for being granted exercise clemency, a pardon for indefinitely skipping your workout. No one expects a cancer patient to hit the gym when they’re sick and bald, and until recently, any exercise undertaken while in treatment was considered a bonus. Also, no one really knew how much exercise was safe during active treatment.

Then, in October 2019, the American College of Sports Medicine (ASCM), the American Cancer Society, and 15 other international organizations published new exercise guidelines for people with cancer. For the first time, scientists from around the world wrote out a formal exercise prescription for those undergoing cancer treatment: at least 30 minutes of moderate-intensity activity three times per week, plus two weekly strength-training sessions. Researchers cited the fact that exercise not only bolsters physical and mental health, but that scads of new data proved the value of physical activity in helping treat and prevent cancer.

And that’s important, particularly if you’re among the small population of young, otherwise healthy people who are diagnosed with cancer each year. Take Kikkan Randall, for example. The 37-year-old cross-country skier was diagnosed with breast cancer just three months after winning a gold medal with teammate Jessie Diggins at the 2018 Olympics in Pyeongchang, South Korea. The footage of Randall—blond hair streaked with pink highlights, face still flushed from skiing her heart out—leaping on Diggins after she crossed the finish line is one of the most enduring moments of the Winter Games. Randall and Diggins broke a 42-year medal drought with their victory and became the first Americans to win gold in the sport. It was Randall’s 18th Olympic race, and her last, as she’d already announced plans to retire after Pyeongchang. That was February 2018. By July, Randall was in a chemo-infusion suite, having the first of many treatments designed to intentionally break down the strong, healthy body that had just carried her to gold-medal greatness.

In treatment for breast cancer at 35, Randall was an outlier. When I was diagnosed last year at age 36—right in the middle of my cyclocross season, and just five months after Randall—I was, too: fewer than 5 percent of the 267,000 American women diagnosed with breast cancer each year are under 40. Sixty-two is the average age at diagnosis, and nearly half of all cancer survivors are older than 70.

As such, traditional exercise recommendations during chemo and radiation often include directives like: “Try to go for a short walk each day” or “Do a few gentle stretches if you feel up to it.” Data from 2018 published in CA: A Cancer Journal for Clinicians suggests that less than 25 percent of oncologists refer patients with cancer to exercise programming, despite conclusions published in the 2010 American College of Sports Medicine Roundtable noting that people with cancer safely could—and should—exercise during and after treatment if given a physician’s OK.

Until last October, the 2010 ACSM recommendations were all that cancer patients had to go by. And due to limited research data, they were just that—recommendations, rather than a specific prescription for exercise. In essence, they boil down to one piece of advice for cancer patients: “avoid inactivity.” It’s not surprising that many medical professionals, when faced with overwhelmed cancer patients, decided to go light on the exercise pep talk.

But for Randall, whose entire career had been crafted around precise physiological data, the idea of maintaining fitness with a short daily walk was absurd. Randall completed her active treatment (six rounds of chemotherapy and 33 rounds of radiation) in January 2019. The new exercise guidelines came too late to influence her workout routines during that time, but even if they hadn’t, Randall would have exceeded them in a bid to retain at least some of the fitness she’d acquired as an athlete at the top of her game.

During her active treatment, Randall adapted her workouts to match her energy levels and treatment schedule. She worked with her former strength and conditioning coach from the U.S. Ski Team to create a circuit workout to maintain strength, and she also spoke with Dr. Susan C. Gilchrist, a cardiac oncologist at the MD Anderson Cancer Center in Texas, for guidance on safely maintaining cardiovascular fitness.

Gilchrist, a former professional tennis player and collegiate national champion, specializes in developing exercise programs to help cancer patients mitigate the deleterious effects of treatment on cardiovascular fitness. She developed the Healthy Heart Program at MD Anderson and is an adviser for Outcomes4Me, a new app designed to help breast-cancer patients navigate treatment options and incorporate healthy habits, like regular exercise, into their daily routines. As evidenced by Gilchrist’s research, which uses epidemiology to study the relationship between cardiorespiratory fitness and cancer treatment and outcomes, breast-cancer patients can and have regained precancer fitness levels. This gave Randall hope.

Having retired from skiing just months before, Randall was able to pivot to other sports she enjoyed in her bid to keep moving through treatment. She asked her oncology nurses if she could bring a bike trainer in to pedal on during chemo infusions (request denied), then compromised by cycling to treatments or hitting the gym first. She went mountain biking, skied the day after her lumpectomy, and even ran a 10K during chemo. Randall also competed in the 2019 American Birkebeiner ski race just after finishing treatment, though she admits she was lacking the extra gears she was accustomed to and, looking back, says she “hadn’t fully appreciated the effect treatment had on my body.”

Randall worked out with far more intensity than most cancer patients while undergoing treatment, and, motivated by the daily video logs she posted on her website, so did I. But you don’t have to exercise with the fervor of a retired Olympian or an aspiring bike racer to see major health boons.

The benefits of staying active are fourfold: Research shows that physical activity can reduce your risk of developing several common types of cancer, as obesity is a risk factor closely associated with cancer. Exercise can also make treatment more effective by slowing tumor growth and even reducing tumor size on a cellular level, while decreasing chronic inflammation and boosting immune function. It can ease the effects of treatment by improving cardiorespiratory fitness and mitigating muscle loss. (Without intervention, your cardiorespiratory fitness levels can nosedive as much as 30 percent during treatment.) And it can promote positive changes in anxiety, mood, fatigue, and quality-of-life markers for physical, mental, and emotional health.

If you’re already physically active at diagnosis, you’re a step ahead of the pack. That said, working out doesn’t make you immune, as evidenced by Randall’s diagnosis just months after winning Olympic gold. But for Randall and other young, fit cancer patients, it’s a way of clinging to some kind of normalcy while your body is physically and mentally under siege. It also makes it easier to bounce back.

“Every day I’m feeling stronger, and I’m grateful I stayed so active during treatment,” says Randall, who won her age group in the 2020 American Birkebeiner ski race and ran a 2.55:12 marathon less than a year after finishing treatment. “I’m optimistic by nature, but I feel confident I’ll come back from this to be just as good as I want to be.”

And perhaps the best news to come out of the new research, even for athletes who have already received a cancer diagnosis: all of that exercise is dialing back your chances of suffering a recurrence. And that’s as good a reason as any for lacing up your running shoes or strapping on your skis.

Talking With Your Child About Cancer
December 14, 2020

Coping With Cancer During the Holidays
November 30, 2020