C3 for Change Aims to Give Back to Cancer Patients 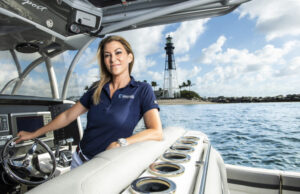 Pictured above is Kim Sweers, a cancer survivor who inspired her son, Chase, to start C3 for Change. Photo courtesy of venicemagftl.com.

C3 for Change was founded on principles of giving back and helping the cancer community. Chase Sweers was inspired by his mother’s battle with cancer and decided to start C3 for Change as a way to support those fighting all types of cancer through care and education programs. Read the article below to learn more!

“They say the two best days of your life are the day you are born and the day you know why,” Kim Sweers says. For the managing partner of one of South Florida’s leading marine dealerships, it is this strong sense of purpose and a push-vs.-pull ideology that propel her forward, whether she’s running her family business or fulfilling personal goals.

The waterway to success hasn’t always been smooth sailing for Sweers, whose life—both business and personal—has seen its fair share of storms over the last 25 years. “We had 9/11, then 2008’s recession, then breast cancer and now COVID-19,” she says.

During this murky time, Sweers turned to the advice of her late friend, Marti Huizenga. “She used to say, ‘Find your silver lining, and pay it forward,’” Sweers recalls. Cancer had become a corporate initiative for FB Marine Group when Sweers and her husband both lost a parent to the disease. Sweers befriended Huizenga during this time and now sits on the board of directors for the Moffitt Cancer Center Foundation, which Huizenga and her husband, businessman and philanthropist Wayne, avidly supported. When Sweers was diagnosed with breast cancer in 2014, her friend’s saying became her mission. The Sweerses’ son, Chase, even started C3 For Change, which has raised hundreds of thousands of dollars for organizations that focus on the care, education, and support of people with cancer.

Staying in tune with their industry and clientele keeps the Sweers family and FB Marine Group ahead of the wave. Sweers, the self-described “boat boss,” says she is ready for the next chapter. “When you’re faced with adversity,” she says, “you either succumb or you plow through.”