5 Facts to Know About Sarcoma 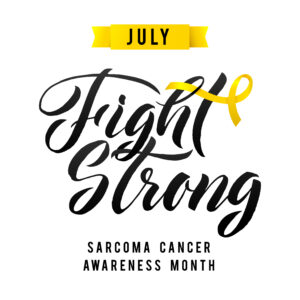 July is recognized as Sarcoma Awareness Month. Sarcoma remains one of the rarest cancers as it makes up a low percentage of adult cancers but is found to be more common in children. Below we are providing 5 facts to know about Sarcoma including how they are detected and why it is best to get a second opinion after being diagnosed.

Deemed a “forgotten cancer” because of its rarity, sarcomas are cancers that start in bone, muscle, connective tissue, blood vessels or fat, and can be found anywhere in the body. In general, there are two types of sarcoma: soft tissue sarcoma and bone sarcoma with more than 50 different subtypes.

Here’s a list of five facts to know about sarcoma:

1. Sarcomas are rare.
Sarcomas are rare in adults and makeup approximately 1% of all adult cancer diagnoses. They are relatively more common among children. Between 1,500 and 1,700 children are diagnosed with a bone or soft tissue sarcoma in the U.S. each year. This makes up about 15% of cancers in children under the age of 20.

3. For most sarcomas, the cause is not known.
Although there are no known risk factors for sarcoma, certain genetic conditions, radiation exposure and some chemicals may increase the risk of developing sarcoma in some individuals.

Patients might also develop sarcomas from radiation given to treat other cancers like breast cancer, cervical cancer, lymphoma and retinoblastoma. The sarcoma often starts in the area of the body that had been treated with radiation, and on average, can take about 10 years to develop. Radiation exposure accounts for less than 5% of sarcomas.

4. Sarcomas are difficult to detect and diagnose.
Because they are so rare and can take multiple forms in multiple locations, sarcomas are difficult to detect and often misdiagnosed. In their early stages, soft-tissue sarcomas rarely display any symptoms other than a painless lump. As the tumor grows, pain may occur depending on where the tumor is located, or if it presses on nearby nerves.

5. If you’ve been diagnosed with sarcoma, get a second opinion.
With a rare and complex cancer, such as sarcoma, it is important to seek the best possible care to improve your chance of survival. Many doctors have never seen or treated a patient with sarcoma. Get a second opinion from a doctor that specializes in sarcoma about the initial diagnosis and the treatment plan, even if you are being treated at a major cancer center. Using advanced genomic and molecular technologies, NFCR-funded research has made significant discoveries in the development of and treatment for sarcoma.