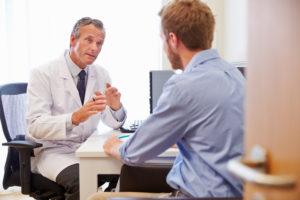 When we think of breast cancer, usually we think of women; but many are unaware that men can actually get breast cancer. Men are now more likely to get screened and have found that mammograms are more effective at detecting breast cancer in high-risk men than in women. Read the article below to find out more about this study and what the studies successes are.

Mammograms are more effective at detecting breast cancer in high-risk men than in women who are at average risk of developing the disease, and could provide potentially lifesaving early detection of male breast cancer.

That’s according to a new study researchers are calling the “first of its kind” and the largest review in the United States of the medical records of men who have had a screening mammogram.

“This is important research, as no prior study has been done in males about screening with mammography,” said University of Ottawa radiology professor Dr. Jean Seely, who was not involved in the study.

“Male breast cancer has a poor prognosis and has not benefited from same improvements in mortality as women in the past 30 years, so improved study of how to improve male breast cancer survival is desirable,” Seely said.

“A lot of male survivors of breast cancer will develop a second cancer later in life, and if we can just detect them earlier it can really improve their outcome” said study lead Dr. Yiming Gao, a diagnostic radiologist at NYU School of Medicine’s Perlmutter Cancer Center.

“Yet there’s no data to show whether mammogram screening is useful or not,” Gao said. “So we looked at this particular subgroup that underwent screening to see if it was.”

The study looked at men ages 18 to 96 who had already been screened for breast cancer between 2005 and 2017 and had at least one year of followup, either via mammogram or doctor visit. Men younger than 18 and transgender men were excluded. There were a total of 2,052 examinations in 1869 men with a median age of 55.

The results, published Tuesday in the journal Radiology, showed screening was very effective in men. Eighteen cases of breast cancer were discovered for every 1,000 male breast imaging exams. In comparison, the detection rate in women was roughly five cases for every 1,000 exams.

That’s likely due to the degree of dense breast tissue in women, Gao said, which can cloud the ability of the radiologist to detect abnormalities. Dense tissue contains milk glands, milk ducts and supportive tissue; less dense breasts are composed of more fatty tissue.

“There’s generally very little breast tissue in men and it’s not dense,” Gao said. “One of the barriers in detecting cancer in women is because many women have very dense breast tissue.”

Some milk ducts exist in men, but they remain undeveloped, due to high testosterone and low estrogen levels at puberty that stop breast development in males.

The “findings suggest that serious consideration be given to recommending regular breast imaging for men at very high risk” after a “well-designed, prospective study is conducted to determine the best way to screen men at very high risk,” said Robert Smith, the vice president of cancer imaging for the American Cancer Society, who was not involved in the study.

According to the American Cancer Society, the absolute risk for a man to develop breast cancer is one in 833. For women it’s one in eight.

Most of the men in the analysis went to a doctor for screening because of concerns about a breast mass. Waiting to feel a lump before getting screened could be why many men have a worse prognosis at disease detection, Gao said.
“A number of studies have shown male breast cancer tends to present at higher stages and have more likelihood to metastasize to the lymph nodes in the armpit and throughout the body,” said Gao. “In general, they don’t do well.” 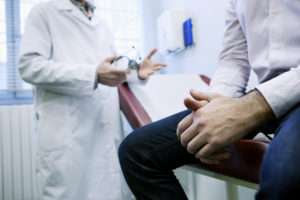 The study found the top risk factor for men was a prior battle with breast cancer, followed by Ashkenazi ancestry and genetic mutations, such as BRCA1 or BRCA2, which have long been linked to increased risk for breast cancer in women. The smallest risk was for men with an immediate relative such as a sister, mother, or child (but not a cousin) who had breast cancer.

Besides a lump in the breast, chest or armpit that may or may not be painless, high-risk men should be on the lookout for nipple retraction (where the nipple begins to turn inward), discharge from the nipple, skin dimpling or puckering, changes in size of the breasts and redness, itching or scaling of the nipple or breast skin. Men who want to lessen their risk for breast cancer should maintain an ideal weight and restrict alcohol consumption. Obesity and damage to the liver from alcohol have been linked to breast cancer in men.

Current cancer care guidelines recommend teaching men to do self-exams and checking men age 35 and older with BRCA mutations for breast cancer at annual physical exams. Mammograms or other screening tests are not recommended due to the low incidence of the disease in men.

“Average risk men should not get a mammogram,” Smith said. “Men at high risk, or who suspect they may be at high risk should talk with their doctors about risk assessment and whether screening would be appropriate. “However, he added, “We don’t really know which age would be the right age to begin.”

While more research is needed before any guidelines should be changed, Gao said, men with risk factors, symptoms or any concern should see a doctor and discuss additional screening.

“We need to increase awareness of breast cancer in men,” Gao said. “Physicians should discuss breast cancer risks with appropriate male patients who may benefit from genetic counseling and possibly mammography screening.”

6 Things You Should Know About Colorectal Cancer
March 9, 2020

Here’s How Much Physical Activity a Day Cuts Your Risk of Colon Cancer
September 16, 2019

Ovarian Cancer Awareness Month: What You Need to Know
September 9, 2019

Does Radiomics Have The Power To Improve Precision Medicine?
August 4, 2017