Leukemia Survivor Opens Up About His Cancer 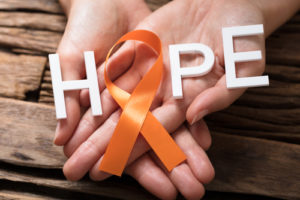 When Lloyd Sutton was diagnosed with leukemia, he tried to keep his life as normal as possible because he did not want people to treat him differently. Lloyd, who is now a survivor, was determined to beat cancer. Lloyd and C3 want you to know you are not alone in this journey. Read Lloyds survivor story and see what he has to say about being diagnosed with leukemia and how he stayed positive during his diagnosis.

Leukemia survivor Lloyd Sutton says the only time he really felt shaky was the night he spent in the emergency room in May 2015. He went there because of extreme fatigue. He’d been sleeping a lot, and even stumbling sometimes. He had thought the problem was caused by his allergies. But one day he drove into the wall of the parking garage at his workplace. He wasn’t hurt, but the incident convinced him he should go to the hospital and get checked out.

When Sutton got to the ER, he had a high fever doctors were not able to control. They told Sutton they didn’t know what was wrong with him and he might not live through the night. “I did not have anyone to talk to. I thought this was a death sentence. I felt lost,” said Sutton. A priest came in and he and Sutton prayed together. The next morning, Sutton was still alive. He was transferred to University of Chicago hospital, underwent many medical tests, and was eventually diagnosed with acute myeloid leukemia (AML), a cancer that starts in the blood-forming cells found in the bone marrow.

People with AML often have symptoms that may be mistaken for symptoms of other conditions, including weight loss, fatigue, fever, night sweats, and loss of appetite. Sutton experienced them all. In the months following his diagnosis while undergoing treatment, he ate little more than jello and lost 75 pounds. Over the next year, he had several intense chemotherapy treatments along with blood and platelet transfusions. And he had some setbacks, including infections and other health problems. In October 2015, he was admitted to the hospital with pneumonia. In December 2015, he had his gallbladder removed.

Throughout his treatment, Sutton’s health care team could not guarantee he’d recover, but said his diagnosis was not a death sentence; reminding him that people do survive AML. “I never thought I wasn’t going to make it,” said Sutton. Once they said I had a chance, I went with the chance. I’ve always been very positive. If I was drowning in the water, I’d think, ‘Someone’s going to come.’ Anytime things didn’t go well for me I always had the attitude it would turn out right; it was going to work out. I never thought, ‘I’m not going to get up in the morning.’ I felt it wasn’t my time yet.”

In July 2016, doctors told Sutton he no longer had AML. He still has follow-up visits every 6 months, and schedules blood tests and other exams as recommended to make sure he stays healthy.

Talking about cancer is kind of taboo in the African American community. At first, I felt like I couldn’t talk about it either. But as time went on and I got better, I felt more comfortable communicating.
— Lloyd Sutton

When he was first diagnosed, Sutton he didn’t tell many people he had leukemia. He kept his work schedule as close to normal as he could, and close family and friends checked in on him and helped fix him meals. But he felt alone because he’d never known anyone who been diagnosed with cancer or AML and had never heard anyone talk about having gone through cancer treatment.

“Talking about cancer is kind of taboo in the African American community,” said Sutton. “At first, I felt like I couldn’t talk about it either. But as time went on and I got better, I felt more comfortable communicating.” He says he feels differently about cancer now and wants to share his story about having leukemia and living as a survivor to help others, especially other African Americans, be healthier.

Unlike some cancers, AML and other types of leukemias do not have any recommended screening tests. Acute leukemias, such as AML, usually develop quickly and are found because of signs or symptoms that are reported to a healthcare provider. However, Sutton says, “I think people in the African American community should have more access to health screenings, should be more aware of their bodies, and get more medical checkups. I didn’t do that. When I had allergies or a cold, I relied on old-time remedies. I didn’t get as much preventative care as I should have. People should know their family history and get their recommended screenings.”

And for people going through cancer treatment, Sutton has 4 tips he says helped him:

“When I got cancer, I didn’t ask, ‘Why me?” said Sutton, “I asked, ‘Am I the only one?’ If people read my story and see themselves as similar to me, they might see they have a chance too.”