Esophageal Cancer Awareness Month | Among Fastest Growing Cancers in US 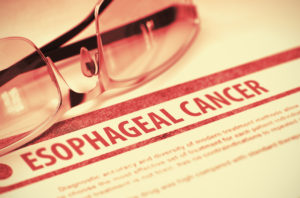 April is esophageal cancer awareness month which is a form of cancer that is rare and hard to detect. A young woman’s father was suddenly diagnosed with cancer and passed away soon after. Acid-reflux was one of the things that was linked to him getting cancer and is now a major risk for cancer among Americans. Read the article below about this personal experience with esophageal cancer and help raise awareness for cancer detection.

Nearly 20 years ago, my family got together in the Finger Lakes region of New York for Thanksgiving. The last night of our trip, we went out to a local tavern for dinner. I can’t remember if my father ordered fried shrimp or fried chicken. I do remember he didn’t eat it because he said he didn’t feel well. When I looked at him across the table, he looked gray.

Afterward, my parents returned to their home in Florida, and about two months later, in February of 2001, my father had trouble swallowing a glass of orange juice. He went to the doctor, they conducted tests, and he was diagnosed with esophageal cancer. I recall my sister, trying to be helpful, sent out an email to the family with a link to an American Cancer Society webpage that essentially said esophageal cancer, while rare, is difficult to detect, and by the time symptoms arise, it’s often reached an advanced stage where it’s become difficult to treat.

I cried the entire weekend, until my eyes were swollen. I was very close to my father. He was my best friend.

His doctors were hopeful and came up with a plan: chemotherapy and radiation to shrink the tumors and then surgery two months later. The surgery happened in May, but by June, tumors were erupting on different parts of his body, both inside and out, like mosquito bites. A large one emerged on his chin, which we called a nipple.

As a last-ditch effort, my father enrolled in a Phase I clinical trial at Memorial Sloane Kettering Cancer Center in New York City. He would commute into the city a few times a week from Long Island, where he was staying with his sister. By September, doctors told him the program wasn’t working. Three months later, he was dead. He was 62.

The doctors attributed his cancer — adenocarcinoma, which usually occurs in the lower portion of the esophagus — to gastroesophageal reflux disease (GERD) — basically, chronic heartburn. When the sphincter between the stomach and the esophagus is weak or doesn’t function properly, stomach acid can move into the esophagus. But the esophageal lining can’t tolerate this repeated exposure and so it can begin to change, cell by cell. In that metamorphosis, cell division can go awry and tumors can erupt and wreak havoc, first in the esophagus, then the lymph nodes, and eventually, the lungs, the liver, and the brain.

It’s been 17 years since my father’s death, but as I approach the age at which he died (I am now 55), I fear the thing that got him will get me. That’s because I, too, suffer from acid reflux — and so do many other Americans. One might even call it an epidemic of heartburn, with more than 60 million Americans experiencing reflux at least once a month, according to the American College of Gastroenterology. Some studies suggest more than 15 million Americans experience symptoms of heartburn every single day.

Globally, most esophageal cancer is designated as squamous cell carcinoma, which typically occurs in the upper and middle part of the esophagus and is associated with alcohol and tobacco use. The same used to be true for the U.S., but starting in 1997, American esophageal cancer patients, on average, became much more likely to be diagnosed with adenocarcinoma, which is associated with GERD. In fact, according to the National Cancer Institute, esophageal adenocarcinoma is one of the fastest-growing cancers in the country. In 1973, just 3 people in a million had adenocarcinoma in the U.S. In 2014, that rate was 26 people per million, representing an increase of more than 600 percent.