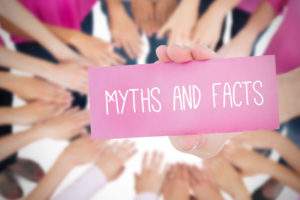 Though it is unknown what really causes breast cancer, society has become paranoid in thinking that things cause cancer that actually have no proven correlation. While it’s good to be careful, it just as beneficial to be educated in knowing what’s true and what is just a myth. Read the article below for some common breast cancer myths that have been debunked.

It may cause bruising and swelling to the breast, which can be tender or painful to touch.

Sometimes an injury can lead to a benign (not cancer) lump known as fat necrosis. This is scar tissue that can form when the body naturally repairs the damaged fatty breast tissue.

However, the area pierced is at risk of infection, at the time of the piercing and as long as you wear the jewelry, possibly even longer.

Because breast cancer is the most common cancer in the UK, it’s not unusual to have one or two people in an extended family who have had breast cancer. For most people, having a relative with breast cancer doesn’t increase their risk of developing the disease.

If you’re worried about your family history, you can speak to your GP or call our Helpline.

4. Underwire and black bras and cancer
Underwire bras don’t increase your risk of breast cancer. And black bras, or any other colour bras for that matter, definitely don’t cause cancer.

There have been some concerns that the wires in the cup of underwire bras may restrict the flow of lymph fluid in the breast causing toxins to build up in the area. However, there’s no reliable evidence to support this.

If your bra is too tight or too small, the wires can dig into your breasts and cause discomfort, pain or swelling. Find out more about wearing a well-fitting bra.

Some people worry that deodorants and antiperspirants stop the body from sweating out toxins, which then build up in the lymph glands under the armpit, causing breast cancer. However, our bodies have several ways of getting rid of toxins and, while sweating is one of them, it doesn’t involve the lymph glands.

There’s also no conclusive evidence that ingredients in deodorants and antiperspirants – such as aluminum or chemicals called parabens – cause breast cancer.

In fact, men can get breast cancer. Both men and women have breast tissue, although men have much smaller amounts than women.

Around 370 men are diagnosed each year in the UK (compared to nearly 62,000 women). Most men who get breast cancer are over 60, although younger men can be affected.

When we’re under stress, our lifestyle behaviours may change. For example, we might overeat and drink more alcohol. Being overweight and drinking too much alcohol both increase the risk of developing breast cancer.

If you’re feeling stressed, talk to your GP or practice nurse about how you might reduce your stress levels. 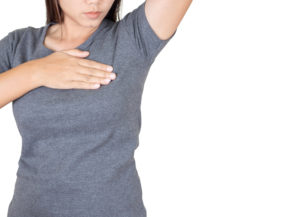 8. Not just a lump
A lump is only one of several possible symptoms of breast cancer and not everyone with breast cancer has a noticeable lump.

It’s important to look at and feel your breasts regularly so you know what’s normal for you, and to tell your doctor as soon as possible if you notice any changes.

Most breast changes are likely to be normal or due to a benign (not cancer) breast condition, but it’s still important to get them checked.

Some people worry that warming (or freezing) plastic bottles or food containers releases a chemical called bisphenol A (BPA) which can interact with our hormones and cause breast cancer.

It’s true that if a plastic bottle or container is exposed to extremely high temperatures, chemicals such as BPA in the plastic are released into the water or food product inside. But the amount released would still be within safe limits and would not cause any harm.

10. Mobile phones and breast cancer
Some people worry that radio waves produced and received by mobile phones may be a health risk, especially if they keep their phone in their breast pocket. These radio waves are a type of low-energy, non-ionising radiation. This type of radiation also includes visible light, ultraviolet (UV) and infrared radiation.

While it’s not possible to isolate any one factor as a cause of breast cancer, there’s currently no evidence that radio waves from mobile phones cause breast cancer or increase the risk of developing it.