When you watch the video of the Contender 28S center console being offered by the FB Marine Group dealership, you’ll see a thorough walk-through that gives all the pertinent information a buyer would want to know about the boat. 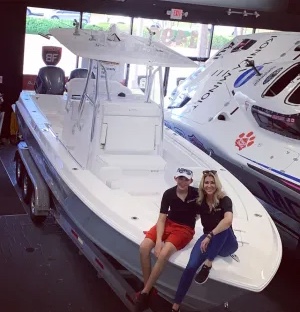 Kim and Chase Sweers on the Contender 28 featured in the video.

You’ll also hear a slightly younger voice than you might expect delivering the information because the person behind the camera is 13-year-old Chase Sweers, the son of FB Marine Group co-owners Randy and Kim Sweers.

“I wanted to sell one of the boats in the showroom and that was the first one,” Chase told Trade Only Today. The video was the first produced by the budding entrepreneur who last year met one of his heroes from the Shark Tank TV show, Robert Herjavec.

Chase said he received “a lot of positive comments” from the video. He says he’s a team player and wants to start contributing more to the family business.

As a 13-year-old, he knows how the younger crowd might shop for a boat. “A lot of people spend time on social media so they could have enough time to see it,” he explained, adding that he has a strategy about where he’ll place the video. “I think Instagram is a good idea because I spend about five hours a week on Instagram.”

Formerly known as FastBoats Marine, the company changed to FB Marine in 2018 and expanded from its Pompano Beach, Fla., headquarters, recently adding locations in Miami Beach and Riviera Beach, Fla.

In addition to owning the dealership, Randy and Kim Sweers are active in local charities. “I feel like my mom is a recognized figure in the business because she’s at all the events alongside my dad,” said Chase. “They’re both owners and they work really well together. My mom is also recognized in the community because she has many friends involved in Broward County charities.”

CLICK HERE TO CONTINUE READING
This story was originally posted on TradeOnlyToday.com.