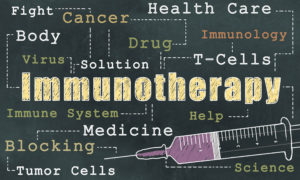 A recent clinical trial could change the face of therapy for a very aggressive and stubborn form of breast cancer: triple-negative. A combination of chemotherapy and immunotherapy boosts survival rates, the scientists found.

Triple-negative breast cancer is so called since its cells lack receptors for two hormones (estrogen and progesterone) and one protein (HER2).

While this cancer is uncommon, it is one of the most aggressive and deadly.

In the majority of cases, it quickly becomes resistant to chemotherapy and continues to spread through the body.

According to existing research, triple-negative breast cancer makes up about 10–15 percent of diagnosed breast cancers. This form of cancer is also more likely to affect younger women in their 40s or 50s.

Recently, immunotherapy — a type of treatment that boosts’ the body’s defenses against disease — has been gaining ground as a potent cancer therapy.

Now, for the first time ever, a clinical trial has demonstrated that immunotherapy, when delivered alongside chemotherapy, can boost survival and halt tumor growth in people with triple-negative breast cancer.

They discovered that this powerful combination is able to extend a person’s survival by up to 10 months, reducing their risk of death or disease progression by up to 40 percent.

CLICK HERE TO CONTINUE READING
This article was originally posted on medicalnewstoday.com.