With summer in full swing, it’s the perfect time to head outdoors and enjoy the sunny weather. But are you protecting yourself from potential risks? The U.S. Department of Health and Human Services has named July as Ultraviolet (UV) Safety Month. The goal is to spread the word about how important it is to protect everyone’s skin from the harmful effects of UV rays.

What Is UV Radiation? 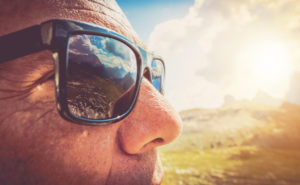 Most individuals don’t realize that UV light is a form of radiation. By definition, radiation is the emission of energy from any source. Radiation has many different types, but UV radiation is a form of electromagnetic radiation. The main source of UV radiation is the sun, although it can come from man-made sources such as tanning beds and welding torches. Radiation exists across a spectrum from very high energy, such as x-rays and gamma rays, to very low energy, such as radio waves. UV rays have more energy than visible light, but not as much energy as x-rays.

The sun emits radiation in the form of UV light, which is classified into three types by wavelength: UVA, UVB, and UVC. The ozone layer is a protective layer in Earth’s stratosphere that blocks all UVC light, but UVB and UVA light pass through it. UVA penetrates deeply into the skin. It’s the type of UV radiation that causes wrinkling or leathering of the skin. UVB is the type of radiation that causes sunburns. Exposure to both UVA and UVB are associated with the development of skin cancer, so it is important to protect the skin during exposure to sunlight.

UV radiation is at its highest when and where the sun’s rays are the strongest. This means that UV levels will be highest around noon on a clear sunny day, even more so during the summer months. UV levels will also be highest near surfaces that reflect sunlight, such as snow or sand, and it’s more pervasive at higher altitudes.

One the most dangerous sources of UV radiation is artificial UV lights like the type found in indoor tanning beds. The amount and type of UV radiation depends on the specific lamps used in the bed, how long a person stays in the bed, and how many times the person uses it. Most modern UV tanning beds emit mostly UVA rays, with the rest being UVB. The American Academy of Dermatology reports that indoor tanning may be responsible for an estimated 400,000 cases of skin cancer in the United States annually.

How to Protect the Skin From UV Radiation

Fortunately, there are measures to minimize the risks that comes with sun exposure …

CLICK HERE TO CONTINUE READING
This article was originially posted on voice.ons.org.