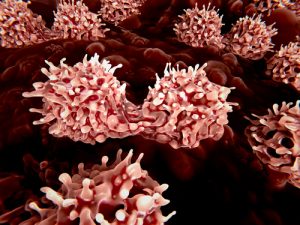 For people with advanced blood cancers, a bone marrow transplant is often the last, best chance at a cure. But the procedure — which involves replacing diseased bone marrow with healthy blood cells from a donor — is not without risks. The most significant is graft-versus-host disease (GVHD), when donor white blood cells attack healthy tissues in the recipient. In severe cases, it can be fatal.

“Graft-versus-host disease is a complication that we’ve been battling for decades,” says Marcel van den Brink, Head of the Division of Hematologic Oncology and Co-Director of the Parker Institute for Cancer Immunotherapy at MSK. “Everybody within this field would agree that figuring out ways to limit graft-versus-host would be real progress.”

In a paper published January 9 in the journal Nature Medicine, a team of researchers led by Dr. van den Brink and Michel Sadelain, Director of the Center for Cell Engineering at MSK, present preliminary research that suggests ways to make transplants both safer and more effective. The team is studying a type of immune cell taken from a donor and genetically modified. In a series of experiments done in mice, they showed that these altered donor cells cause less GVHD than unmodified donor cells, and deciphered the biological basis of this phenomenon. The research could lead to changes in how blood cancers are treated.

Tipping the Balance
A bone marrow transplant from a donor wipes the slate clean and gives a patient the potential for a cancer-free life with a new set of blood cells. But there’s another way the procedure heals: Because the donor immune cells are genetically different from the recipient, they can recognize any remaining cancer cells in the body as foreign and destroy them. This phenomenon — a kind of lucky side effect — is called graft-versus-tumor. The flipside of graft-versus-tumor is when the donor immune cells attack normal tissues, causing the unwanted side effect of graft-versus-host.

“The billion-dollar question in our field is how to tip the balance between graft-versus-host and graft-versus-tumor,” says Dr. van den Brink.

One way researchers are attempting to tip this balance is by equipping immune cells with genetically modified proteins that specifically recognize targets on cancer cells and therefore enable a directed attack. These chimeric antigen receptors, or CARs, have proven remarkably successful at beating back several types of advanced leukemia in both children and adults, including acute lymphoblastic leukemia and chronic lymphocytic leukemia.

Leukemia-fighting CARs are built to recognize a marker called CD19, which is found on blood cells called B cells from which these leukemias arise. Dr. Sadelain’s group designed some of the first clinically effective CARs, and CAR T cell therapy is now being tested in clinical trials around the world. CARs can be made from a person’s own T cells or from a donor’s. Donor T cells are used when a person relapses after a bone marrow transplant (and no longer has his or her original T cells).

This article was originally posted Mskcc.org.