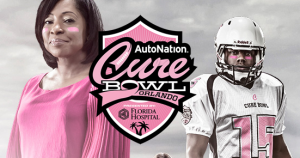 The Orlando Sports Foundation (OSF) released Sunday that the UCF Knights will battle the Arkansas State Red Wolves, co-champions of the Sun Belt, in the second-annual AutoNation Cure Bowl presented by Florida Hospital.

The contest is set to be played on Dec. 17 at Camping World Stadium with the kickoff set for 5:30 p.m. on CBS Sports Network.

“We are honored to host Arkansas State and UCF at the second AutoNation Cure Bowl presented by Florida Hospital,” said Orlando Sports Foundation President, Jeff Lagos. “On behalf of our organization and its partners, we welcome the Red Wolves and Knights as we bring teams together to find a cure for cancer.”

“The AutoNation Cure Bowl has been recognized as an attractive destination for teams,” Cure Bowl Executive Director Alan Gooch said. “We are very excited that UCF and Arkansas State are coming to Orlando, providing our second–year bowl with a great matchup. This is a tremendous opportunity to generate significant community awareness for our cause to find a cure for cancer.” The announcement resonates with Gooch, who is a UCF Hall of Famer after giving 25 years of service to the Knights football program. He played as a defensive back in 1981 before spending 22 years as a member of the coaching staff. It was Gooch’s vision along with a group of Orlando business leaders and philanthropists back in the fall of 2007 that led to the creation of the AutoNation Cure Bowl. UCF (6-6) is only the eighth team in NCAA history to earn a bowl berth after not registering a win the season before. First-year head coach Scott Frost engineered an impressive turnaround with his fast-paced offense. The backbone of the Knights throughout the season was a stout defense.

“Our kids are excited to be in a bowl game,” Frost said. “We’re especially excited about being able to play in the Cure Bowl, right here in Orlando in front of our hometown fans. Our kids have earned the right to take part in a bowl game and I couldn’t be more proud of them for what they’ve accomplished so far this season.” The Knights represent the American Athletic Conference in their eighth bowl game in program history. UCF has played half of those postseason games in the Sunshine State, which includes three trips to the St. Petersburg Bowl. The Knights are also making a return to Camping World Stadium (formerly Orlando Citrus Bowl), which the program called home from 1979-2006 before moving on-campus to Bright House Networks Stadium.

This article was originally posted on Curebowl.com.