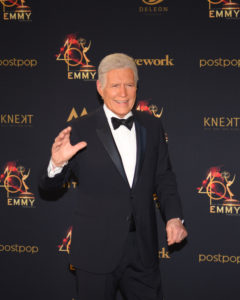 Amid Pancreatic Cancer Awareness Month, Alex Trebek is sharing his journey with Pancreatic Cancer. Trebek wishes he’d known the persistent stomach pain he was experiencing was more than just pain. Now he is on a mission to increase awareness of Pancreatic Cancer symptoms. Read the article below for more information.

Jeopardy! host Alex Trebek, who announced in March that he had been diagnosed with stage 4 pancreatic cancer, has released a public service announcement to help raise awareness of the disease.

In the months since, the longtime game show host, 79, has spoken openly about his cancer struggle. He announced in early October that he had begun another round of chemotherapy to counter cancer after being in remission.

Speaking in a PSA released Wednesday, Trebek said that he has partnered with the World Pancreatic Cancer Coalition. Trebek said that the survival rate for pancreatic cancer is low and that greater awareness is necessary to help more people survive their diagnosis. The five-year relative survival rate for early-stage pancreatic cancer is about 34%, but only 3% for people diagnosed with late-stage cancer, including stage 4 cancer, according to the American Cancer Society.

“I wish I had known sooner that the persistent stomach pain I experienced before my diagnosis was a symptom of pancreatic cancer,” Trebek said. He explained that people should also watch out for other telltale signs — mid-back pain, weight loss, the onset of diabetes and the yellowing of skin or eyes. The American Cancer Society advises that anyone with any of these symptoms should be checked by a doctor (although they are more likely to be caused by other conditions).

Trebek encouraged others to help him raise awareness during November, which is pancreatic cancer awareness month. People can show support by wearing purple and posting on social media, Trebek explained.

“Together we can get it done,” Trebek said of raising awareness.

The World Pancreatic Cancer Coalition thanked Trebek for his support. “We’re sending you our thoughts as you fight this disease,” the organization wrote.